To mark 50 years of its chronographs, TUDOR is relaunching its Black Bay Chrono model in steel with a reworked case and two dial options with contrasting sub-counters in the purest tradition of the sports chronograph.

Since the launch in 1970 of the Oysterdate model, its first chronograph, TUDOR has always produced watches that are closely tied to the world of motor sport. Since 1954, TUDOR has likewise been constantly improving its professional divers’ watches. The Black Bay Chrono model combines these traditions in a sports chronograph for purists, with contrasting sub-counters and a high performance automatic Manufacture Calibre, with column wheel and vertical clutch. 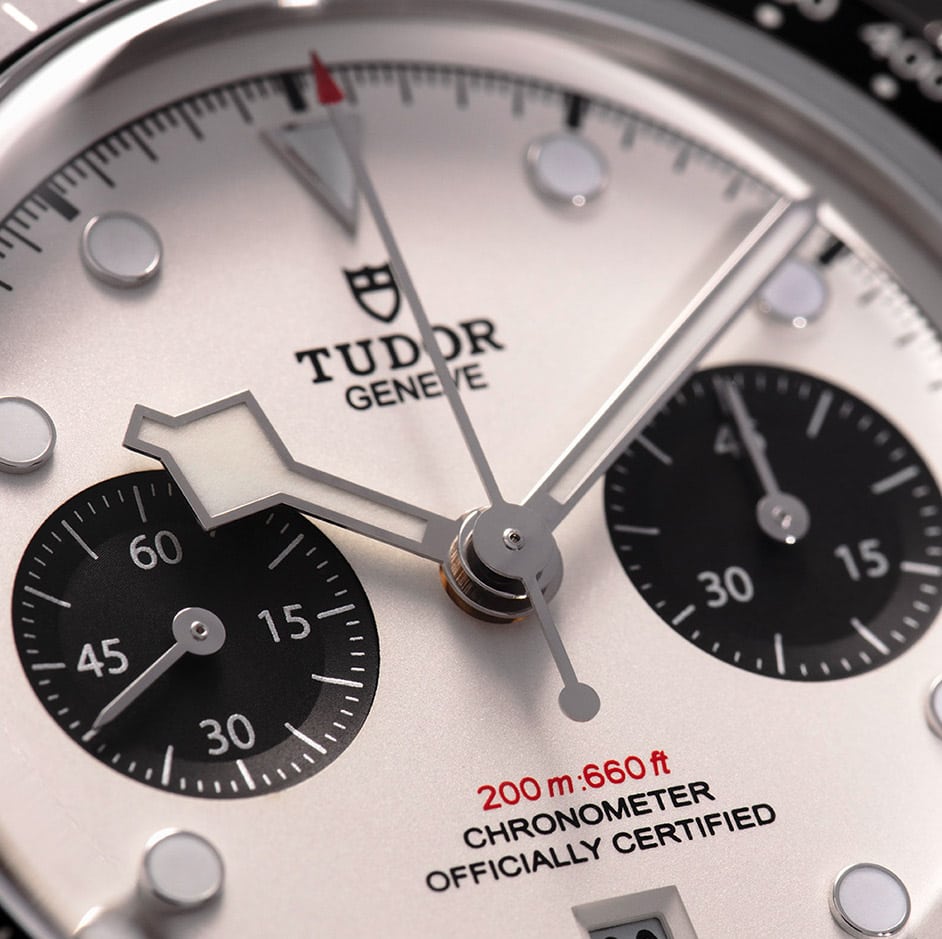 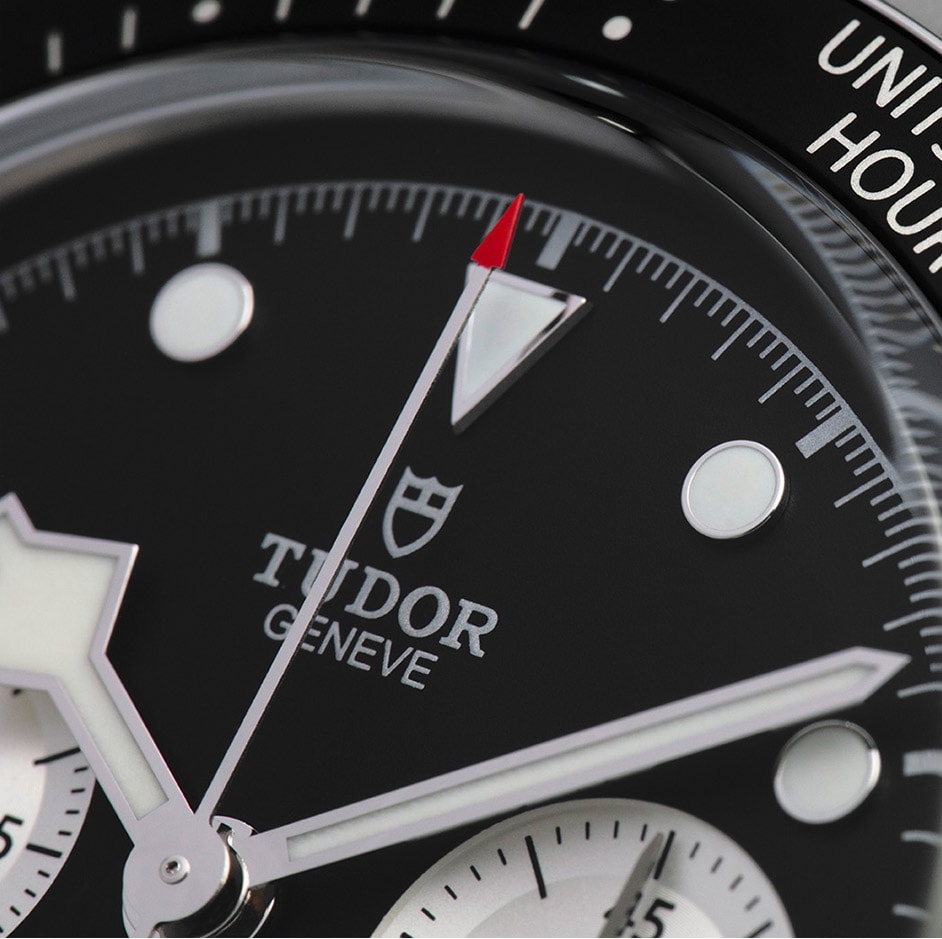 The Spirit Of Earth And Sea

The Black Bay Chrono model has made the brand signature “Snowflake” hands its own, in a version honed to ensure optimum readability on its domed dial. Available in two versions, matt black or opaline, the dial includes two hollowed sub-counters in contrasting colours, matt black and white opaline respectively. Inspired by the first generation of TUDOR chronographs, there is a 45-minute counter and a date aperture at 6 o’clock. Recognisable Black Bay characteristics are preserved in a 41-millimetre steel case refined by the ingenious cut of the lower part of the sapphire crystal and a repositioned movement. 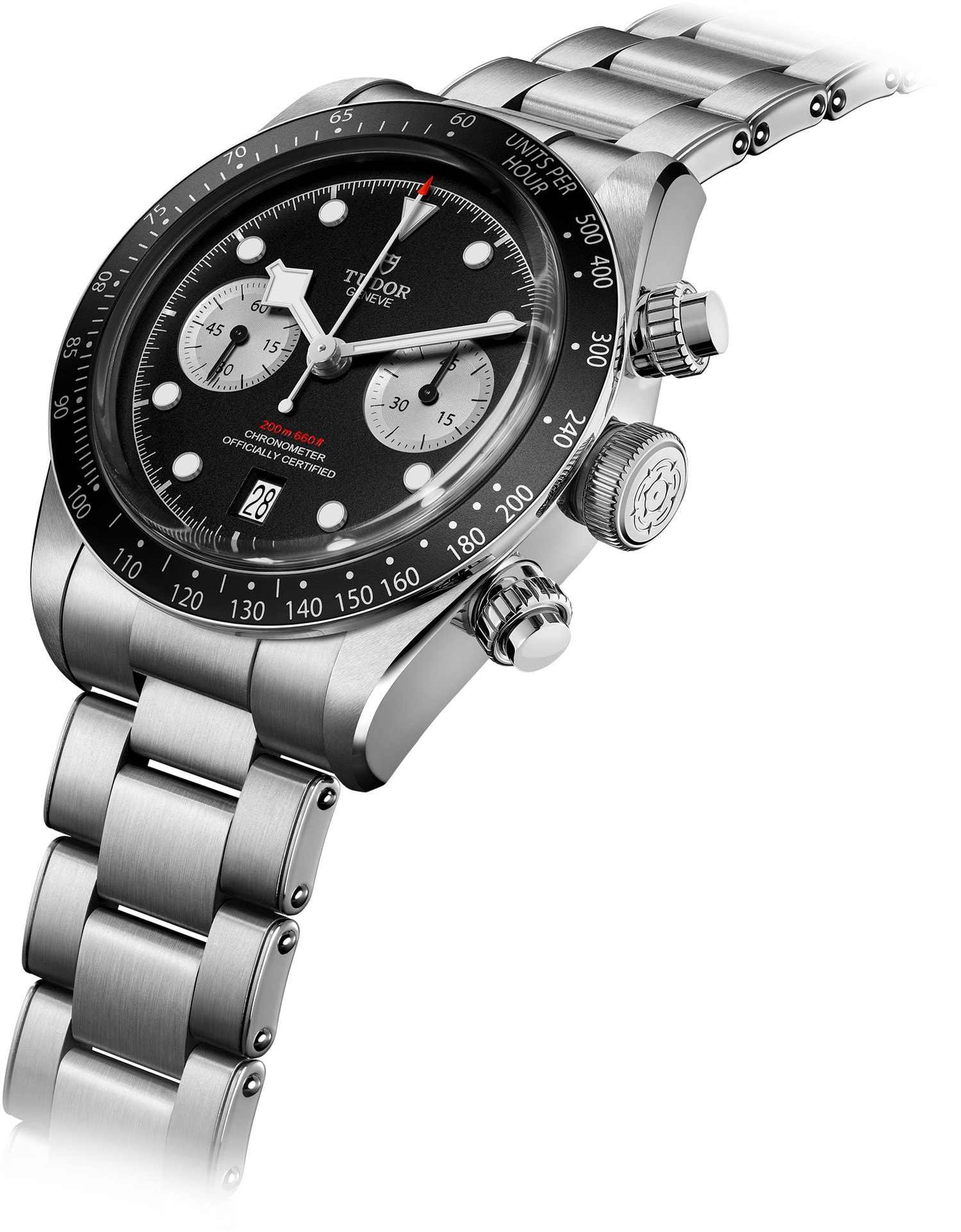 The Essence Of Black Bay

Like other models in the Black Bay range, the Black Bay Chrono has adopted TUDOR’s characteristic angular “Snowflake” hands that first appeared in the brand’s 1969 catalogue. A subtle blend of traditional aesthetics and contemporary watchmaking, the Black Bay line is far from simply being an classic re-release. Resolutely anchored in the present, it brings together almost seven decades of TUDOR divers’ watches. Whilst it is neo-vintage in conception, its manufacturing techniques and its robustness, reliability, durability and precision as well as the quality of its finish are above modern industry standards. 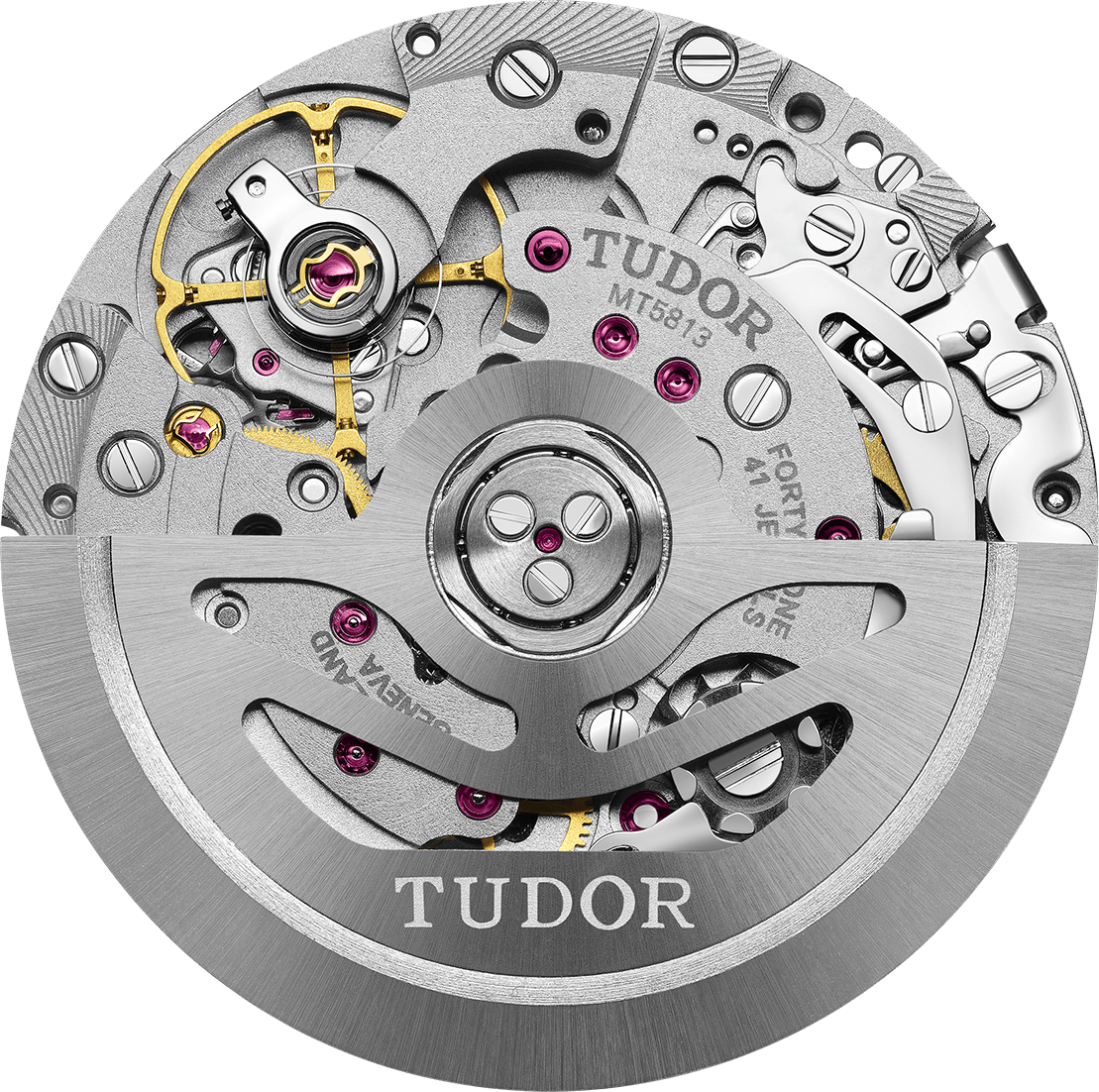 Keeping with the TUDOR philosophy of quality, the MT5813 boasts 70-hour power reserve. It presents extraordinary robustness and reliability, guaranteed by the array of extreme tests applied to all TUDOR products. Derived from the chronograph manufacture calibre Breitling 01, this movement is the result of a lasting collaboration between the two brands. 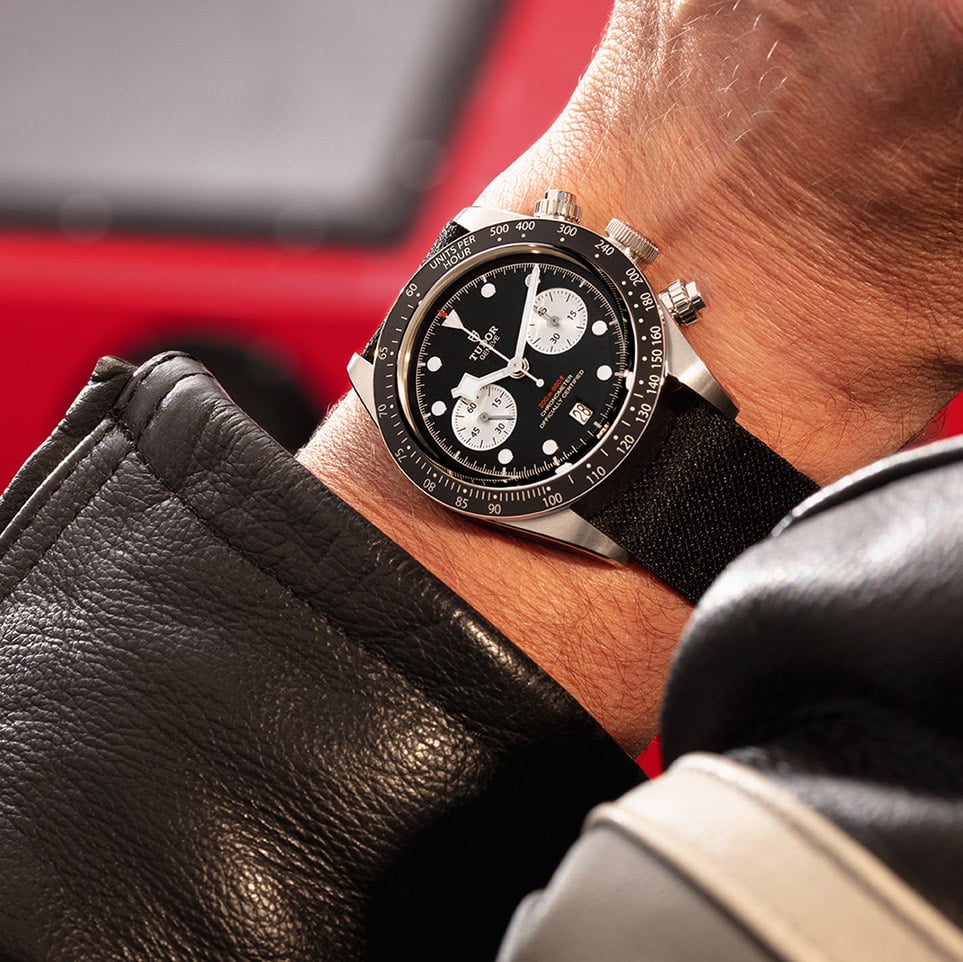 Whilst the Black Bay Chrono is neo-vintage in conception, its manufacturing techniques and its robustness, reliability, durability and precision as well as the quality of its finish are above modern industry standards.

In 1970, TUDOR introduced its first chronograph, the Oysterdate. Immediately adopted by the world of motor sport, it paved the way for 50 years of technical chronographs that TUDOR has never stopped improving. 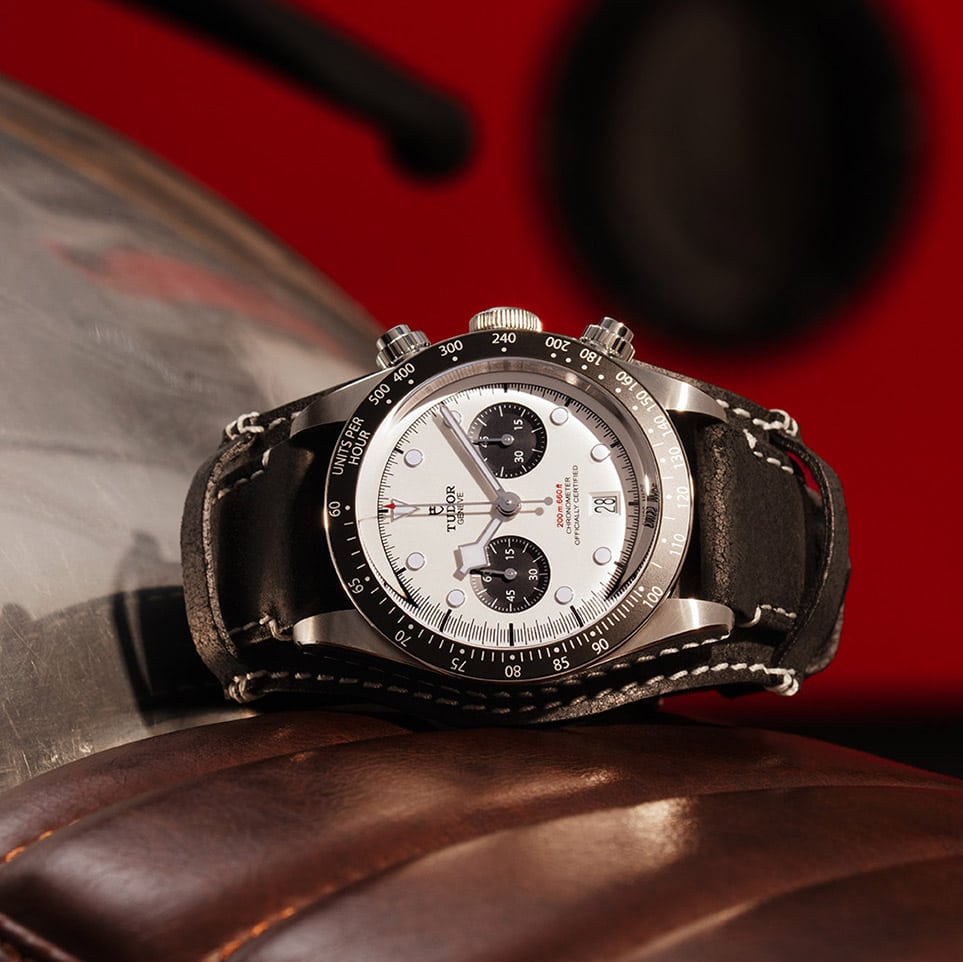 The Black Bay Chrono comes with a choice of a riveted steel bracelet with polished and satin finish, a bund in aged black leather with ecru topstitching and folding clasp, or a black strap with a motif chosen by TUDOR and woven by the craftsmen of Julien Faure. Made using the Jacquard technique, a traditional method achieved by the hundred-year-old family business from the St-Etienne region of France.

* All prices are Tudor’s suggested retail price inclusive of prevailing SST. Tudor Watch reserves the right to modify the prices and models on this website at any time.

On our website, we use services (including from third-party providers) that help us to improve our online presence. The following categories of cookies are used by us and can be managed in the cookie settings. We need your consent before being able to use these services. Alternatively, you may click to refuse to consent, or access more detailed information and change your preferences before consenting. Your preferences will apply to this website only. You can change your preferences at any time by returning to this site or visit our privacy policy.

By authorizing third-party services, you allow the placement and the reading of cookies and the use of tracking technologies required to keep our website reliable and secure.
DECLINE ALLMORE OPTIONSACCEPT ALL
Manage consent

This website uses cookies to improve your experience while you navigate through the website. Out of these, the cookies that are categorized as necessary are stored on your browser as they are essential for the working of basic functionalities of the website. We also use third-party cookies that help us analyze and understand how you use this website. These cookies will be stored in your browser only with your consent. You also have the option to opt-out of these cookies. But opting out of some of these cookies may affect your browsing experience.
Essential Always Enabled
Essential cookies are absolutely necessary for the website to function properly. These cookies ensure basic functionalities and security features of the website, anonymously.
Rolex (Adobe Analytics and Content Square)
Analytical and statistics cookies are used to understand how visitors interact with the website. These cookies help provide information on metrics the number of visitors, bounce rate, traffic source, etc.
SAVE & ACCEPT
Powered by